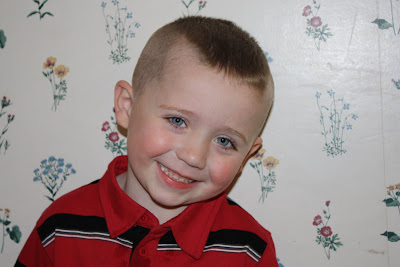 My Tyroney turned 4 on March 9. He was really looking forward to his birthday. We woke him early, singing Happy Birthday. I heard Gavin ask Tyrone if he needed any help opening his presents and Tyrone told him "No, I can do it all by myself, I'm 4 now." He loved all his gifts and was very excited that this was his day. He had a few meltdowns throughout the day and I really had to bite my tongue several times and tell myself, if there was a day that he can get away with such things, it's his birthday. We had a small family/friends party, well there were 32 people there, so I guess it wasn't too small. Tyrone wanted a Wolverine cake. He was so excited to blow his candles out. He loved all the gifts that he got. He took time to play with each of them one by one before moving on to the next one. He has been entertained all week long and he is good enough to share with Gavin & Niamh. He is growing up so fast. 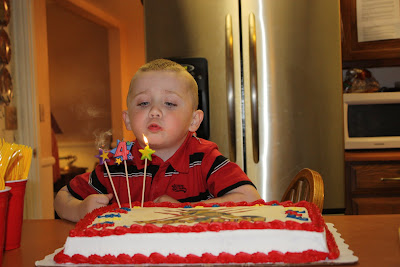 Tyrone is such an affectionate little boy. He always knows the days when I need to hear "I love you Mommy." He always tells Lucas "She's all mine." I love that he is able to express himself and he makes me smile. He has always acted older than he is and I can really depend on him. I know it's hard being a middle child and he does have his moments but he really is such a character. He is always dressing up and role playing and I love his imagination. We love him so much and life wouldn't be the same without him. Happy Birthday, Tyrone Connor Wolverine (he added that part) Abbott.
Posted by ABBOTTLAND at 2:42 PM

Ah, so cute. The hair cut=adorable. Can't believe he's four. I still remember when he was born. He looked like a cute little old man. Ah now. xoxoxo

What a cutie! Hope he had a wonderful Birthday, he was so cute on the phone :) Love him!!

He's so adorable. Sounds like he had a great birthday!

I have a 4 yr old too and my goodness is he trying my patience these days! He's the oldest though...

They get big too quick, don't they? He sure is a cutie. I hope he had a fun day.