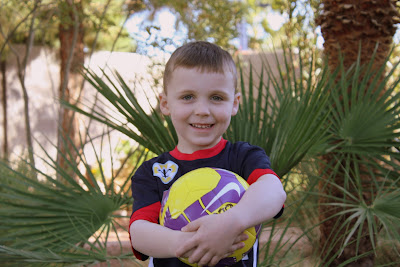 Our big boy Gavin started Soccer yesterday. We signed him up with Henderson United Youth Soccer. His team is called The Blazers and Gavin is so excited to be part of a team. There are 6 other boys on the team and there is actually another Gavin on the team. His first practice went really well, Gavin was excited to be out on the pitch and he had no inhibitions. When practice was over he got upset because he thought he was supposed to get a gold medal. Lucas had to explain to him that he will probably get a medal at the end of the soccer season. It was kind of hard having Tyrone at the practice. He didn't understand why he couldn't be out there playing and kicking the ball into the goal. We found out that he is old enough to play, but we don't want them to be on the same team. We're debating putting Tyrone in Soccer or something like Taekwondo. Lucas was so excited and proud for Gavin to start Soccer. Lucas played Soccer as a kid for many years. His mom has a photo album with photos of him as a little kid, in his uniform and photos of him playing with his different teams each season. He was so cute.
I got a great photo of Gavin making a goal and he jumped really high, I was so stoked that I caught that shot. 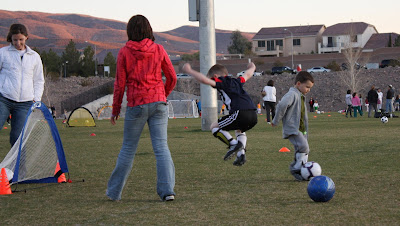 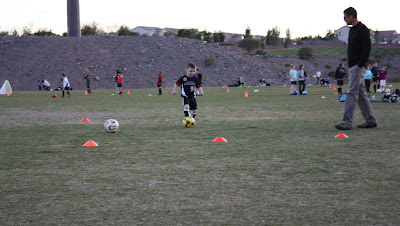 Posted by ABBOTTLAND at 7:37 PM

How fun for him! Maybe he'll be the next David Beckham. ;)

That's awesome! Soccer is the best:) You'll have SO much fun at the games!