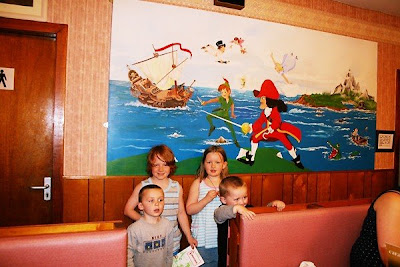 Gavin and Tyrone with Jamie and Jennifer Campbell! We all went to have ice cream at Vissochi's, which is right down the street from J.M. Barrie's house. Notice the Peter Pan picture in the backround. 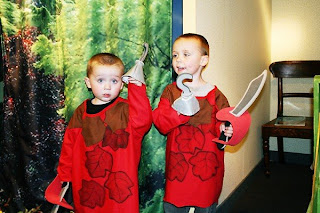 We went to a town called Kirriemuir which is the birth place of Sir J.M. Barrie, who wrote Peter Pan. Gavin and Tyrone on the left are dressed as Captain Hook. 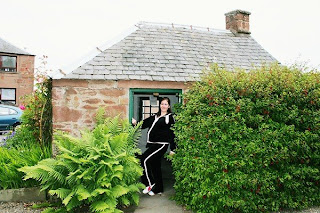 In the next picture is Mandy standing next to a little building. It is a washroom just outside of the flat where he grew up. Its very small, and only one room. If you've seen "Finding Neverland," with Johnny Depp and Kate Winslet, they show how Barrie used the washroom to show all of the plays that he wrote. He would charge neighborhood kids to enter and see his plays. This building also plays in part of the Peter Pan story where the lost boys built a place to hear stories from Wendy.
Posted by ABBOTTLAND at 2:35 PM