Yesterday the heavens opened and the rain fell...all day! Mandy's cousin Denis came over to pick us up so we could tour the town. The only issue is his little European car could only take 1, other than himself. We decided that we would take the bus into town. Once in town we went to take a tour of the history of Dublin. Its called Dublinia, and it showed us how the Vikings came to Dublin about 841 A.D. and built a fort. The city wall is mostly gone but there is still parts that is still standing and it is awesome to see. During the Viking tour Gavin was able to try on an authentic Knights helmet, and Tyrone loved seeing actual bones from an old viking woman. Tyrone kept yelling "PIRATE" in the middle of this quiet gallery! It was pretty funny. There were several stained glass windows that I was able to get a picture of, even though the sign said I couldn't take a picture. At the end of the tour there was a gift shop with a lot of cool stuff. The boys each got a wooden sword and sheild. We took many pictures but you'll have to wait until I can put them on a disc. We took another tour of a crypt under Christs Church. You walk into a giant Cathedral with the gothic type archways. The stone is all old and gray. To the side was a stone stairway which took us under the church. Down in the crypt it was cold and creepy. There were headstones of certain church members in the 1800's. I kept making ghost sounds and needless to say the boys stayed very close to us. They were kind of scared.

After the museum and church it was still pouring rain. We were caught outside for quite a while trying to catch the luas and bus back to Clondalkin. When we got back to the house we were cold, hungry and tired. It was an early night for us all.

Today we fly to SCOTLAND!! The land of my McKnight forefathers. The land of William Wallace and Nessie! We are staying at the home of the Campbells. My Dad served his mission is Scotland and they are members of the church over there. I think my dad taught Sister Campbells mother and baptized her. I do not look foward to getting on a plane today but Its quicker than taking a boat. I plan on seeing the castle at St. Andrews and the Sterling Bridge, where William Wallace fought a battle. Also Dundee high school where he allegedly went to school in the late 1200's. I am very excited. We'll take lots of pictures and we'll post them after we get back to Dublin next Monday. 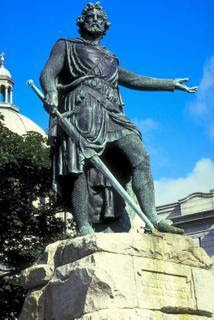 Sounds fun! But doesn't it frustrate you when you go all that way and they tell you that you can't take pictures. I mean sure, you can buy a post card, but your own picture shows that you were actually there. :- )

Sounds like you guys are having lots of fun. Thanks for all the cool lessons along the way. I'm learning a lot from you post about your trip. Enjoy!!

Sounds like you are having a really good time in Ireland! I loved Scotland when we went camping there.
The castles are amazing!!!!

Hey, I found Daniel Scott's Blog and they just had their baby. Thought you guys might want to know. danbriscott.blogspot.com