So for the past few months, Gavin has been talking constantly about submarines, deep sea divers, flippers, The Navy, The Army & tanks. He got a submarine toy for Christmas and plays with it all the time. He's been asking for flippers since before Christmas. We have explained to him that there is no point in getting flippers until the summer time when he can go swimming and it's not so cold outside. This is all he talks about. He figured out that soldiers in the Navy get to live in submarines and he told us that when he grows up he will be a soldier in the Navy. He is very excited for this. Then, he decided he likes tanks and he will be in the Army as well as the Navy. I'm not too thrilled about this, but hopefully he will grow out of this phase. Not that I wouldn't be proud of any of my children who chose to serve in the military, but it's got to be scary for all those moms left behind.
A few weeks ago, we took a trip to Idaho to visit my sister, Trudi and her family. On the way back, while driving through Ely, we spotted a tank outside a veterans office. We had to stop and take some pictures of Gavin & Tyrone in front of it. It made his day, it was all he could talk about for the rest of the day. 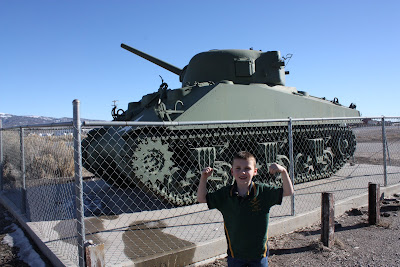 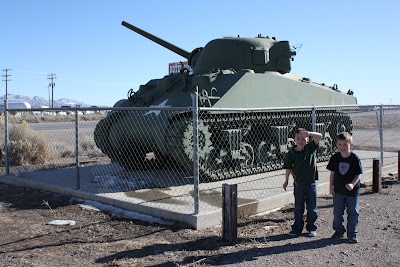 Posted by ABBOTTLAND at 1:30 PM