I had one of those moments yesterday, when I felt inadequate as a mother. I promised Gavin & Tyrone that I would get them a slurpee after the park. When we got inside 7-Eleven, and I wrestled with the slurpee machine, with Niamh on my hip and both hands busy with purse and keys, I realized what a mistake it was to attempt it. The clerk was of little help and I ended up turning and walking out of the store without the slurpees and with two angry, screaming kids in tow. I realized when I got home and put Niamh & Tyrone down for a nap and was able to finally release a huge sigh, that there are some things that I just cannot do with 3 kids by myself. I don't like to have obstacles in my way, but sometimes you just have to admit that you are beaten.

Since we have all been stuck at home sick and I have not had much of a break from the kids, I have found myself losing my patience all too quick. I'll admit I feel sorry for myself and wonder what kind of life this is that I have. The past few days I have been made very aware of what a blessing my children are in my life. This post is about Tyrone & Gavin; my Peanut Butter & Jelly.

Tyrone (my peanut butter): Last summer, while in Ireland, we went to a museum one day in Dublin with my dad. We took a tour of the museum. Afterward Lucas was browsing the gift store while my dad and I talked outside. Tyrone was in a stroller, but I had let him out to run around the courtyard with Gavin. Tyrone had turned 2 years old 4 months earlier. One minute he and Gavin were playing, the next minute Tyrone was gone. We searched every where, inside and out. I said silent prayer over and over. There was a door that led outside to a building site and a parking lot. I had searched it already. My dad went out and searched one more time and there was Tyrone running behind some cars. I cannot explain the feeling of despair when the thought flashed through my mind that I might never see my chubby cheeked, big blue eyed Tyrone ever again and worst of all that he was lost in another country. What kind of life would I ever have if I lost one of my children. It would be hard to go on. I think about this now and all those tantrums and hard days with Tyrone are worth it, to have him in my life. He back talks me all day and tries me, but when I go to check on him at night and watch him sleep so peacefully, like an angel, I realize that I'll take the terrible 3's anyday if I get to keep him forever.

Gavin (my jelly): We registered Gavin for Kindergarten the other day. Gavin has been attending a specialized preschool program within the Clark County School District since he was three to help with his speech and some developmental delays. He has come such a long way. I was so worried about him, when he would barely talk and when he would get so frustrated because I didn't understand what he did say. I was so afraid that he would be one of those kids who are lost in a school system who needed help and struggle all through school. I had forgotten how little he spoke, until I looked at a video we have of Gavin last May before we went to Ireland. He really has come such a long way with his speech and I am so proud of him. I am really enjoying Gavin being 4, soon to be 5 in September. He is so grown up and surprises me everyday with little things he thinks of. I asked him the other night at bedtime if he was excited for Kindergarten. I said "Do you think you'll be shy?" and he said "No, I'm brave." And that's the truth, he really is brave. He has already attended 2 different elementary schools and was able to quickly adapt to 2 new teachers and friends. He makes friends quickly wherever he goes and he always seems to be the leader. I love seeing this quality in him, especially as my oldest child. I still remember the day he came into my life when I received the best gift of all, Motherhood.

Every day at lunch time, I ask Gavin & Tyrone what they would like for lunch. Tyrone says "A peanut butter sandwich" and Gavin says "Just a jelly sandwich." I love my little men and I am so proud to be their mam/mom. 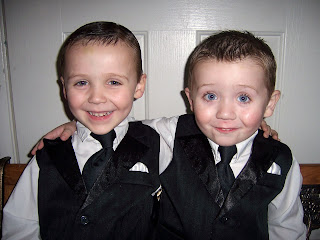 I completely agree! Kids can be such butts sometimes, but I wouldn't trade them for anything! Hope you and your cute kids get your slurpees next time :)

I couldn't help but shed a few tears as I read your post. I know all too well the panic that squeezes the air from your lungs as you frantically search for your lost child. The silent prayers, the desperate plea to turn back time,rewind and never have come to that moment, the world spinning, and every ounce of energy focused on finding him. I hope never to experience it again.

I like you never want to admit defeat. We are both strong and sometimes it is our strength that makes it so hard to surrender even when surrender is the best option. Nothing has taught me this lesson more than marriage and parenthood. Sometimes the most well fought battles are those that we concede defeat in. You are a wonderful wife and mother. I'm grateful to be related and to have had the opportunity to get to know you so much better the last few years. One day we will look back on these have-to-skip-the-slurpee days and miss our babies that so consumed our every minute of every day! Thanks for sharing your thoughts.

I love your little peanut butter an jelly boys. I love that picture that you posted of them too.

What a good post Mandy! I have been in those situations where I've been so frustrated being along w/just TWO kids!
We just can't forget to give ourselves a break from time to time (Girl's night out).
How scary that you almost lost one of your boys! I've been in that panic mode ONCE at a park, where one minute he was there and the next minute he was gone to other side of the playground.

You are blessed to have born these children and to raise them. You're a wonderful Mam/Mom!

Aw tears....They are so cute! I was just thinking at dinner that they are growing up so quick :( They are such little characters. Totally cute on the name Peanut Butter & Jelly :) xo

That was such a sweet post, Mandy. I found myself crying through the story about Tyrone. That's my biggest fear. I think you are such a fabulous mother. No kids can be that great without one :)

such a nice post mandy! all the hard days are worth it as u know. the boys (and niamh) are gems and they have great parents (ah now!) hope u get out and about this week.....live @ the pool....enjoy xo

please be comforted with the knowledge that all mom's go thru frustration and madness when raising their children. As I was reading your post it brought back memories of when I was trying to adjust to 3 kids in stores. I remember one time in 7-11 I was 8 months pregnant with number 4 and I was carrying Brooke and the boys were fighting over who got to use the slurpee machine first. The cashier asked if I was crazy having another child. I thought it was rude, but I just said "Yep, I am".

Oh, what a wonderful post to read. I can completely agree with you. Some times it is just so hard to be a mom but I wouldn't change it for anything in the world. I hate that you had to experience that with Tyrone. What an awful feeling. These kids are special and that's why they try us so much.