Gavin started 1st grade this year. He is really enjoying it so far. Even though he has been going to school for a few years already, the separation this year was the hardest for me. I think the fact that he's gone from 9am-3pm every day is the main reason, but I guess I realize that this is where you start letting go as a mother. The school doesn't let you walk your child to their line on the playground. The day that I had to say goodbye and let him walk through the school gate alone was really hard for me. When I hugged him goodbye, I could feel his little heart beating a million miles a minute. I know he was scared. Each day as I part with him at the gate and he walks away, I have a flashback to when I started each new grade, or when we moved to America and started a brand new school in a completely different country. I know Gavin is going to make friends and he will be fine at school, it's just the letting go that I'm getting used to. He's doing much better with his homework already. I mentioned in a post at the end of the school year that I was considering putting him on medication for ADHD. The doctor prescribed some, but I just kept feeling an overwhelming prompting not to fill the prescription. I think Gavin just needs a little extra help and I think eventually he will catch up. That's what I'm praying for anyway.
Tyrone started preschool. He goes on Tuesdays and Thursdays. I'm part of a Joy School group. It's me and 5 other moms. We take turns teaching the curriculum each week in each of our homes. Most of the ladies did it last year, so we are working on year 2. Tyrone absolutely loves it already. He talks non stop all day long anyway, but now the talking is intermingled with songs and he tells me about what he has learned and who said this and that. It's really good for him and I know he is going to be so ready for Kindergarten by the end of Joy School. It really is a fantastic program.
Niamh is almost 2 and thinks she is that already. She is obsessed with the Tim Burton version of Alice in Wonderland. She watches it from start to finish and multiple times a day. She even sings the theme music as we're driving along in the car. She talks so well and is growing up way too fast. The other day, my mother-in-law compared her to Shirley Temple. She has the silliest expressions and is always running around or dancing. We took pictures recently and when it was her turn, she posed all by herself and was even rolling around on the ground and looking at the camera. It is so fun having a little girl, I'm loving it.
~Life is really busy right now. I'm trying to get back into some sort of routine since slacking all summer long. The kids and Lucas cannot wait for Halloween, Lucas already bought Candy Corn and decorations. Football season starts tonight, so I guess I won't be seeing Lucas until January when the season ends. I'm still learning what the whole game is about. I mainly just enjoy watching the players run around in their tight pants :) 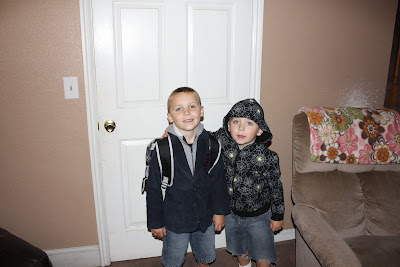 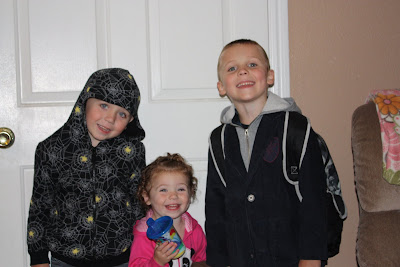 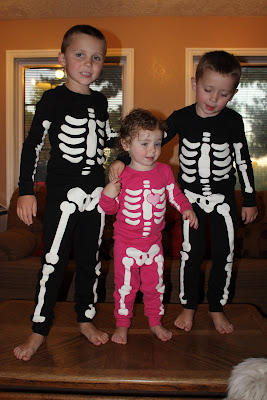 Posted by ABBOTTLAND at 6:18 PM

Oh I just love your little family:) I would DIE if I had to leave my kid at the gate! Holy cow, I think your feeling of separation are totally legitimate. And how cool that you're doing Joy School! I was in that when I was little and I remember loving it!

That made me sad just thinking about you having to leave him at the gate. That is cruel! Your kiddos are so cute and growing so fast.

It's so sad to watch them growing up so fast. I know it's necessary, but I hate it! They are all so cute and I love their Halloween jammies.

I agree, your kids are growing up way to fast. I can't believe they are in school already. That is awesome about Joy school, I bet Tyrone loves it. The jammies are too much, they are the cutest ever!!!!! xoxo