May has been a crazy month for us. We are on the go all the time. It has been a big month for Gavin especially. First of all his first soccer season ended. The Blazers won the last few games and had a pretty good season. It was great to see each player get better throughout the season. Gavin learned a lot. We are planning on putting him on The Blazer team next fall. To celebrate the end of the season the team and their families went to "Pump it up" where we jumped and had pizza and cake. Gavin got a trophy which he was very excited about. 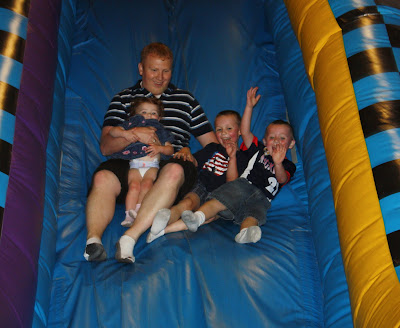 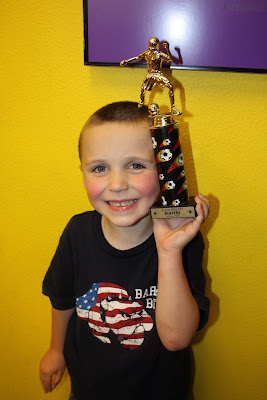 Gavin also graduated from Kindergarten. He had a graduation. All the children sang songs they had learned over the year and received little diplomas. Gavin sat in the front row and he sang every single word of every song, even one in Spanish. I was overcome with pride as I watched my first born be so grown up and confident as he sang and kept his eyes on me the whole time. I have worried about Gavin all year long. Although he has caught up in his speech and has come so far with that, he still has a major issue with staying focused and paying attention. I have felt for a long time that he may have ADHD, he doesn't show as much hyperactivity, but he struggles with inattentiveness and finishing tasks without being constantly reminded and prompted. I also found out this week that Gavin is no longer eligible for special education services within the school district. So he was exited from the program. He will continue on to first grade and that makes me nervous that he won't be able to keep up in a regular ed class. He will have a resource teacher who will be available if he needs extra help with reading, math etc. I visited with his pediatrician this week and we decided to start him on some medication. I am very nervous about having him on medication, but I am willing to try it for a month and see if it makes any difference. I have done a lot of research online and he definitely shows a lot of the symptoms of ADHD. You always want the best for your children and it's so hard when it's your first born and you are really learning as you go. I don't have all the answers and I get so frustrated with him sometimes, when it really is not his fault. Gavin's doctor assured me that she put her own son on this medication several years ago and it has done wonders for him and his self esteem especially. I hope and pray I am doing the right thing. I also heard that altering your child's diet can affect ADHD. I'm willing to try anything.
Aside from all of this, Gavin is a very smart and amazing boy. He surprises me all the time. He has come so far in his development already and I know he will continue to make strides where that is concerned. I am so proud of him and I love him so much. 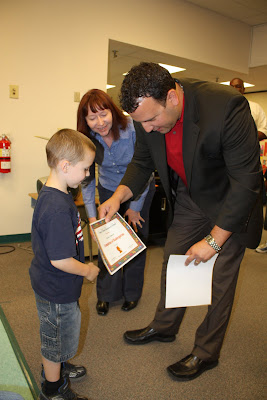 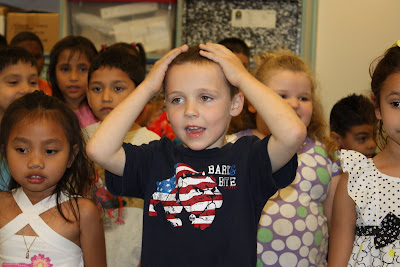 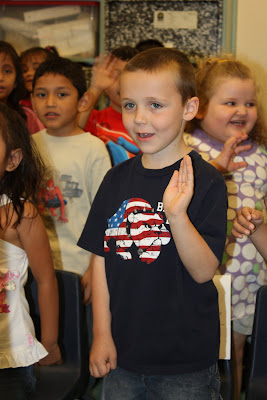 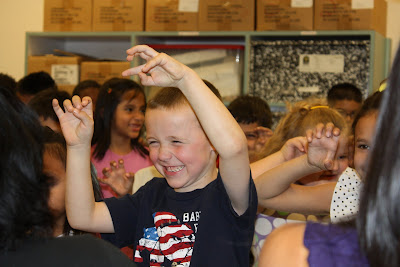 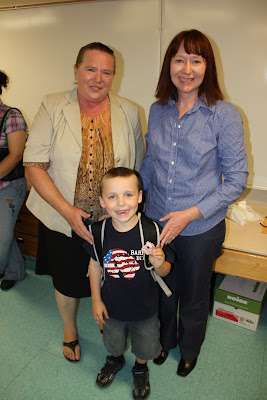 P.S, These events took place on two different days. Notice Gavin is wearing the same shirt. He is obsessed with Bulldogs right now and wears this shirt as much as he can.
Posted by ABBOTTLAND at 8:20 PM

Ah, he's so cute :) I still remember coming home from school to meet him for the first time! He's growing up :( Can't wait to see him in a few weeks...and the other 2 munchkins.

He's awesome - Kami's little BFF. He's made great strides. And Lucas looks like he might have had more fun than the boys at pump it up....ah now!

Mandy-You've talked to a doctor so you probably already know about this. But I have a little brother with ADD (no H for the Hyper.) Everyone, including his teachers could always tell if he'd missed his medicine. Good luck with everything.

Parenting is so hard. You are such a good mom and Gavin is a good kid. Let me know what you think about the medication after he has been on it awhile.

Yay Gavin!!! So proud of him. He is so smart and he will be grand!! Things will work out just how they are supposed to so try not to worry. He has the best parents who will make the best choices for him. Tell him we send our love and miss him and Ty and Niamh too and can't wait to see you guys soon :)

We are going through the same thing with Kalie right now. She's younger than Gavin but she will start kindergarten next year and we have self-diagnosed her with ADHD. We've stopped giving her foods with the dye Red 40 in it,and it seems to help. Have you tried that yet? It's hard to know if you should give someone so young medication..I defintely know what you're going through =)