I met with Gavin's teacher and some of the school staff this week for his annual IEP (Individualized Educational Program.) I was so impressed to see how much progress he has made since his IEP last January. Since that IEP last January, Gavin has attended 3 different schools. I was so worried that he would fall behind in all the moving and adjusting to the new school environment. I am so proud of my little man. He never ceases to amaze me. Because I am with him 24/7, I don't always see those academic achievements, great or small. As I think back to when we first got him in the Early Childhood Program at age 3, he could barely talk and was classified as "developmentally delayed." Because Gavin is our first child, Lucas and I always expected so much out of Gavin and got frustrated with him many times, without realizing that he needed some developmental intervention. I feel so guilty about this at times, but I am also so grateful to have gotten him into the program and his academic achievements are proof that the program works. I know that the Clark County School District has their flaws, but I am so grateful for this program and what it has done for Gavin. Academically, Gavin is pretty much on the same level as his peers. He struggles paying attention in class, which is also a problem at home. This is something we are working on. I may have to talk to his pediatrician about this. I feel like Gavin has made the most improvement in his speech. The Speech/Language Pathologist at his new school was amazed at how far he has come in his speech since a year ago. According to her observation Gavin is meeting the speech expectations for his age.
Gavin is getting so grown up. He loves to ask questions and is obsessed with skeletons and bones. We had KFC one night for dinner and after eating a chicken leg he insisted that we wash the chicken bone and carried it around for the rest of the night. I hope this means he'll be an Orthopedic Surgeon or maybe a Paleontologist :o) 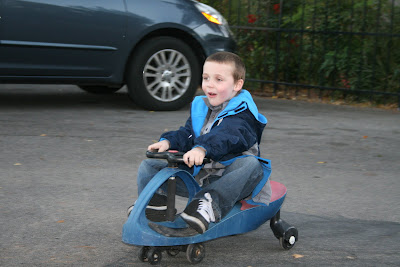 Posted by ABBOTTLAND at 6:41 PM

That's great that he is doing so well!

He is so cute! It's so amazing how well he is doing :) The obsession with bones is so cute....I mean, if he ends up being an orthopedic surgeon, he hopefully will remember the poor relatives :)

I am so glad to hear that he is doing well! And don't beat yourself up about expecting a lot. I look back at how much I have expected from my oldest and then I see other kids for the age they are, and I have to force myself to realize that he is mentally a lot younger than I expect him to be. I think all parents do it with their oldest.