This past Friday night, Tyrone was sent to bed early for throwing a tantrum. He'd been acting up all day and just whining and acting tired. He screamed all the way upstairs and proceeded to kick the walls beside his bed. He was crying and screaming for a while and then it got really quiet. A little while later I went upstairs to check on Tyrone. I discovered that Tyrone had locked the door on the inside. I started knocking on the door, quietly at first and soon after I began pounding on the door and yelling for Tyrone to open the door, NOW. Well, there was not a sound. I started to panic and continued to bang and kick the door and try to get Tyrone's attention. I thought that he was sleeping at first, but when I was being so loud and practically screaming his name, over and over, I began to really get worried. I took the door knob off the door and tried to unlock it with a screwdriver, no such luck. I called Lucas at work, a little hysterical at first, because I was thinking the worst at this point. Lucas told me to try and kick the door in. It wasn't budging. So, he told me to get the hammer and just try to knock the lock out of the door. It only took me a few tries and the lock fell out and the door opened. I found Tyrone fast asleep in his bed, looking so angelic and cozy. I had to shake him to wake him up. He finally sat up and the first thing he said was "I'll be good." It was hard for me to be mad at him when he had no idea that I just destroyed his bedroom door, just to make sure he was alive. It's a good job he's so cute! 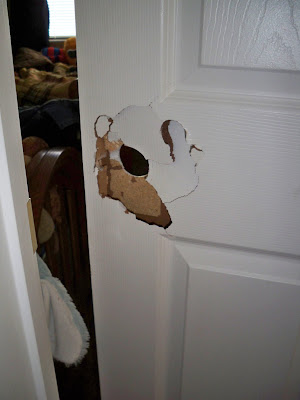 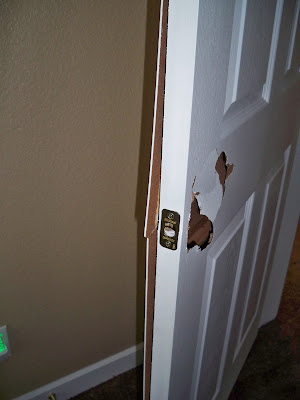 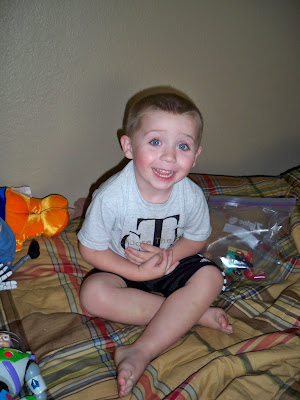 Posted by ABBOTTLAND at 5:46 PM

Oh, I feel for you! Tyson used to do the same type of thing. Except he actually pushed his door through to the other side! What a little butt! The pic of him on his bed is too cute. Love your header pic too.

What a great story! I would have been freaking out too. Glad he was ok

I would have done the exact same thing. Ben locked the door to the bathroom while Jacob was climbing into the tub which was filling with water and I FREAKED out!

That is the most innocent face I've ever seen!

O my gosh that is so funny in retrospect, of course. I cant believe he wore himself out that much that he couldnt hear all of that commotion and, then him saying, "I'll be good" priceless. being a mother is a crazy job, Ive learned that and its only been 4 months, just think of what I have to look forward to...

Mandy, I would have been at panic mode too. Nice job on the door!!!
I guess it's time to put a door knob on that doesn't lock from inside.
Dom did that to us too a while ago and we had to take the door knob off.

Oh! Poor little thing was just exhausted! That story was awesome. Oh and I LOVE that picture of the kids on your header- that is AWESOME!!

I love how he's wearing a Choose the Right shirt. hahaha. So cute.

Oh my goodness, I haven't laughed that hard in a long time. I'm glad he was ok.

Your poor dear. You killed the door. I probably would have done the same thing. Next time call me. I have a special key.LOL. I'm glad to hear everything is ok. A simular situation happened to Caden in our old house. His bedroom door had to be opened with a KEY which we did not have because it was our first night there. I could hear him in there crying for dear life, he was only a year old. Not much he could do. So we just kicked the door in. Oh, that night was rough. See ya around.

WOW-what a story. I can't imagine how panicked you were? You must have some great biceps girl. I guess you probably got some extra strength when you thought one of your babies was in trouble.